How to Install and Use Noritz Remote Controller A step-by-step guide on installing and using a Noritz remote controller RC-7646M-2 to change the temperature, monitor water heating operation, and troubleshoot the problem.

Features of the remote controller

The controller's digital display shows the actual exiting hot water temperature, in F, or the water flow in gallons. Also, an indicator shows when the burner is ON and a priority indicator, so when it is lit, the hot water temperature can be set. The display will flash when you press the flow meter alarm set button. If there is a problem with the water heater, an error code (11, 90, 99...) will appear. See the list of all error codes found on Noritz tankless.

Temperature setting buttons are found as the up and down arrows, and they are used for setting the hot water temperature at the exit of the heat exchanger and water heater and flow meter alarm. Keep in mind that the brand new unit is factory set at 110 F.

The power button is used to turn the water heater ON or OFF and mute the sound (by holding it for five seconds).

The flow meter alarm set button triggers the alarm after the preselected volume of water, in gallons, is delivered by the Noritz tankless water heater.

How to install a remote controller 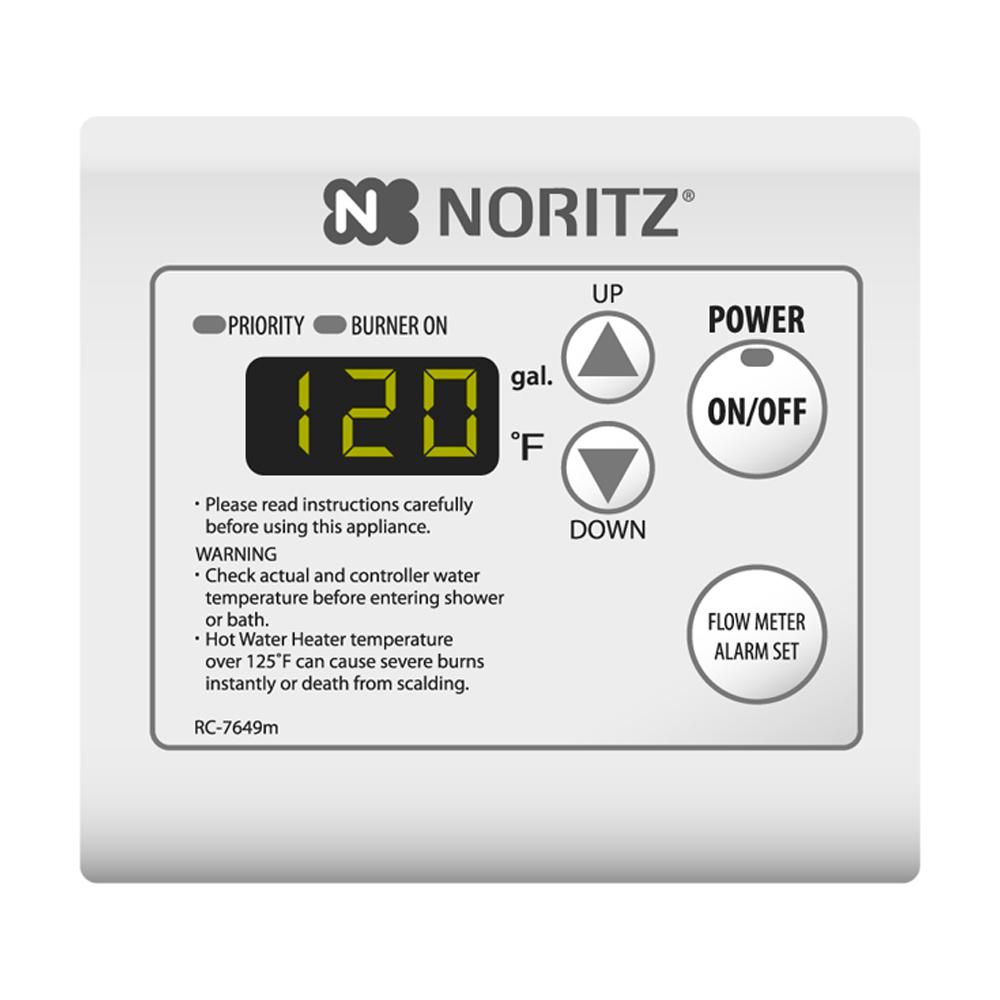 The remote should be installed in an easily accessible location and not exposed to water, steam, and chemicals, or direct sunlight. It can be installed outdoors but in the waterproof box since the unit is only water-resistant, not waterproof.

Either you are using one or two Noritz water heaters (using the Quick Connect Multi-System), only one remote controller should be installed (to one unit).

How to use a remote controller

Start by pressing the On/Off button. The display will show the preset temperature of 110 F, so by using the up (increase) or down (decrease) arrow; you select the temperature you want.

The temperature you can select is between the minimum 98 F and maximum 140 F, while the recommended is between 120 F and 125 F. Temperatures above 125 F can scald so that the display will flash for 10 seconds, so be aware if you have kids around.

How to use the Flow meter alarm

When the water flow reaches the set level, the alarm will sound for ten seconds. Stop the water manually, or it will continue running (the burner ON light is OFF). You can set the water flow from 10 gallons to the maximum of 990 gallons, with the 5 and 10 intervals. This great feature can be used, for example, to indicate when a hot tub is full (if hot water is not used for another application).

As said, you can use the remote controller to troubleshoot the problems on a Noritz tankless water heater. A numerical error code will flash if the problem occurs, such as the priority light and ON/OFF button.